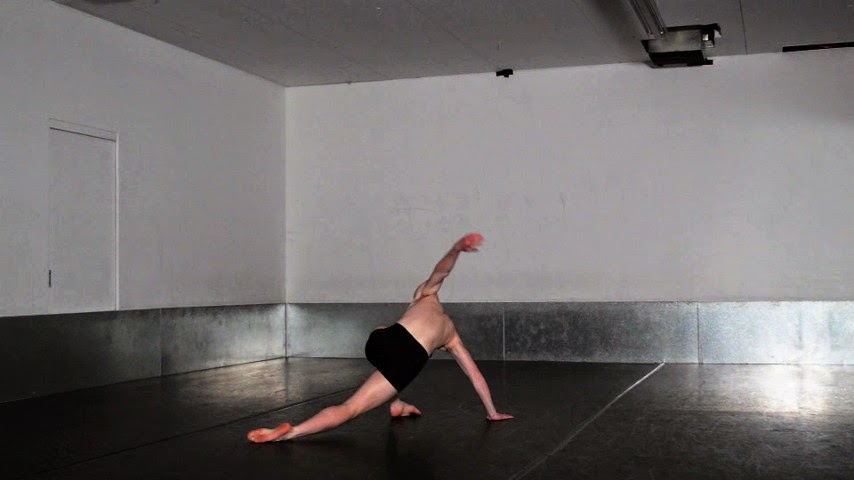 With the conclusion of the Paint en Pointe series and the release of the album, I thought it might be a good time to go back and take a look at my first collaboration with Patric Kuo, oingoboingo from 2013. Matthew Gode, who also performed in Paint en Pointe, co-directed and co-choreographed this one-night performance with Patric. The performance featured a video projector as well as multiple monitors installed in the 2-room space at DNA Projects in Chippendale. I wrote a single short piece for this work, which was looped for the 2 hour duration of the performance. Patric and Matthew performed live in each of the rooms on the night, while the projection and wall-mounted videos featured pre-recorded video of other dancers (in varying group sizes and scenarios but always in the same stark studio location).

The premise for this work, developed by Patric and Matthew, involved the use of reversed audio and video. The choreography for the videos was done to a reversed version of the audio. However, on the night the music would be played normally (while the videos were in reverse). The ultimate result has quite an ethereal and deliberate feel; much more arresting than standard reversed footage, I think because of the consistent relationship between the sound and movement during the process.

This approach meant that the composition needed to meet particular considerations so that it sounded both appealing in its normal forward-playback, but could be normally counted and danced to when reversed. One of these considerations involved having a generally (but not strictly) palindromic structure, both overall and within each theme. Another consideration was ensuring that the tails – that is, the audible conclusion of the decay of a sound (not the conclusion of the written note) – ended on rhythmic measures. Often longer decays – for example from a percussive crash, or a sound with heavy reverb or delay – do not strictly conclude their audible decay on a standard beat. However, when reversed, the last audible element of the tail becomes the start of the note and the placement and length of the tail becomes much more significant. Finally, I made sure to use very short percussion samples. Again in an effort to prevent the integrity of the rhythms from being altered by the reversal process. Maintaining the integrity of the rhythms in both directions was key to preserving the relationship between the original composition and the reversed footage. I used many percussive sounds that were only transients, which means that they are perceived as being audibly the same in both playback directions and are so short in duration that the placement of the notes feels essentially the same both ways as well. A few of the key percussion sounds are recordings of knives. The knife sharpening scrape that functions as the main ‘snare drum’ was put through some bitcrush distortion to make it sound more textured and musical while still preserving the flexibility of the transient.

The video above was taken by a reviewer on the night. It shows the video projection cast onto the gallery’s front window, while behind it you can see Matthew Gode’s live performance. As that video shows, both the live performances and the five reverse playback videos were synchronised to the piece. Below are two of the videos that were played on the wall-mounted monitors in the gallery space.